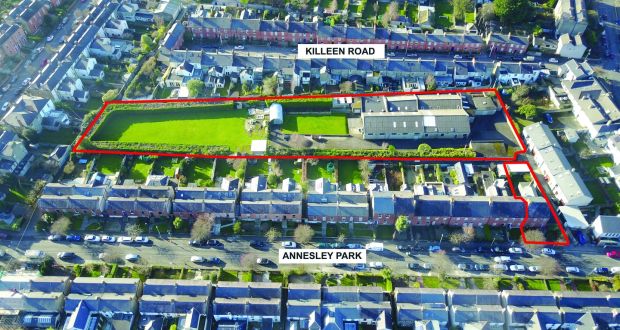 Dunville Close off Annesley Park bought by Seabren for €8.7m

An infill housing site close to Ranelagh village in Dublin has been sold for €8.7 million – a long way ahead of the guide price of €4.9 million-plus. “It’s probably a record price for a piece of land without planning permission,” said the selling agent, Iain Finnegan of Finnegan Menton.

The 1.25-acre site is located at Dunville Close, off Annesley Park, and includes a vacant redbrick house alongside the entrance. The new owner will have to use the side garden of the house to widen the entrance to the development site.

Iain Finnegan initially planned to sell the site by private treaty but with six bidders pitching for it he changed tactics and opted for a “private auction”. Bidding resumed at €6.95 million and with four bidders chasing the site in the final stages it was knocked down at €8.7 million to Seabren Developments, which is led by Michael Moran of the Red Cow Inn.

The site has been owned by the same family since 1944 and comes with Z1 residential zoning and a number of different development options. These include an infill scheme of 20 semidetached and terraced houses or up to 45 two- and three-bedroom apartments.

The site is around the corner from a parade of shops on Dunville Avenue, including Mortons food store. The strong competition for the development opportunity again underlines Ranelagh’s popularity among young professionals looking for homes. It has the largest choice of restaurants outside the city centre.